Q and A with Craig Groeschel (Good Stuff)

This blew me away.


Playing For Change | Song Around The World "Stand By Me" from Concord Music Group on Vimeo.

This cover of Stand By Me was recorded by completely unknown artists in a street virtual studio all around the world. It all started with a base track—vocals and guitar—recorded on the streets of Santa Monica, California, by a street musician called Roger Ridley. The base track was then taken to New Orleans, Louisiana, where Grandpa Ellitott—a blind singer from the French Quarter—added vocals and harmonica while listening to Ridley's base track on headphones. In the same city, Washboard Chaz's added some metal percussion to it.

And from there, it just gets rock 'n' rolling bananas: The producers took the resulting mix all through Europe, Africa, and South America, adding new tracks with multiple instruments and vocals that were assembled in the final version you are seeing in this video. All done with a simple laptop and some microphones.

This has to be the very best cover of this song I have ever heard, amazing!


Shark Dive from Brent on Vimeo.
This was the highlight of the trip. The only thing that would have made it better would have been if Denise would have been there to do it with me. The video is around 14 minutes long so if you want to fast forward to the feeding, it starts somewhere around 9 minutes in.
Posted by fatalbert at 5:28 AM No comments:

Little video of the room we had at Roatan


Roatan Room from Brent on Vimeo.

This was a small dive resort on the island that we stayed at called Las Rocas. It was a little primitive but still had a good stay there.
Posted by fatalbert at 6:26 AM No comments: 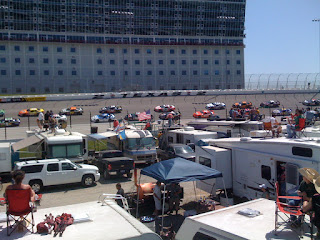 This past weekend we had the opportunity to go to the Texas Nascar Race and finally, after 17 races being held there, our favorite driver Jeff Gordon finally won there. This was one of two tracks that he had never won at. I remember the very first race that I got to go to there, I was a Nascar Newbie and had decided that he was the driver that I was going to cheer for. Denise's brother Brad had the infield RV spot and I was pumped about getting to go to a race. They dropped the green flag and I think it was on lap 2 that he crashed and finished 43 out of 43 drivers that day. We have been going back every since hoping that each one would be the one he would finally would get a victory at.
We had our great friends Rod and Juleah come down with us this time and enjoy the races with us. It is always fun when they are around. Sadly for Juleah, the driver she was cheering for, Carl Edwards, should have won the race because he had a better car than Jeff did, but ended up having a long pit stop which cost him the race.
I couldn't help thinking while we were cheering our favorite drivers on about how excited we get for them but yet when we go to church, how reserved and still we are. Being raised a Southern Baptist, that to me was reverence, a way of showing respect. I can't help but think that if we were all as excited about church that maybe, just maybe our churches might be a little more crowded and a little more packed, you know, sort of like a Nascar race this past weekend that had over 100,000 people at it.
Posted by fatalbert at 5:50 AM No comments:

Promote Your Page Too